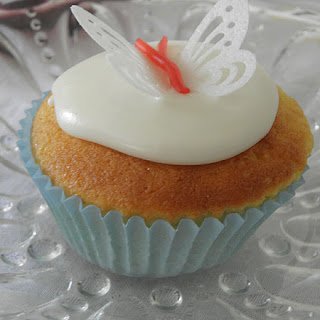 Would you like to decorate some cupcakes for a party, yet have no cake decorating skills? Then read on...
Now I wish I had the decorating skills of my talented nieces who make incredible edible things like this out of sugar! 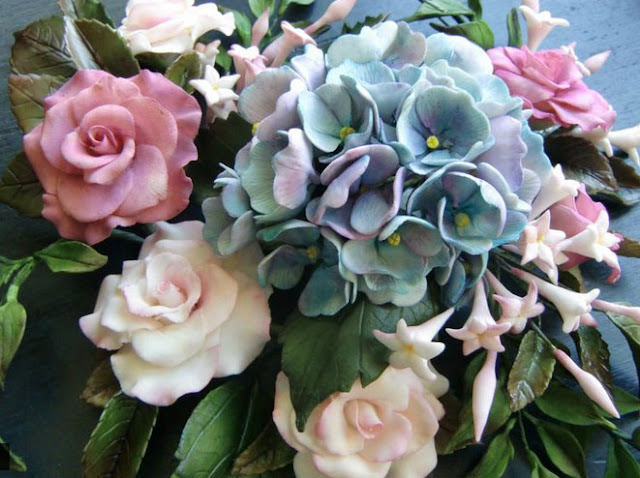 ...but lets face it  I don't. (Oh, BTW if you are getting married in the UK and need an amazing cake topper let me know and I'll put you in touch with them).


So anyway, for this simple and effective little decoration, perfect for afternoon tea parties or little girls birthday parties...all you need is some wafer paper or rice paper and a decorative paper punch. I used my Tonic Studios butterfly punch. If you are going to dedicate a new punch to this task, then do use it a few times first on some regular clean white paper to get rid of any residual fluid that is used for lubrication of the punch mechanism  -  you don't want be eating any of that!


Punch out your pretty designs in the wafer paper. I gently folded my butterflies and then stuck the fold into my wet icing. 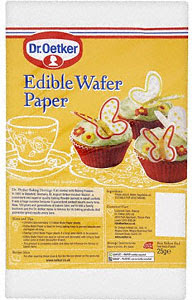 For the body of the butterfly - which just added a bit of fun (although it looks just as effective without), I cut some strawberry laces into little pieces and then snipped along them to split them into antennae.

If you want to make your creations even fancier you could use some decorative cupcake cases. Now have a fun tea party! 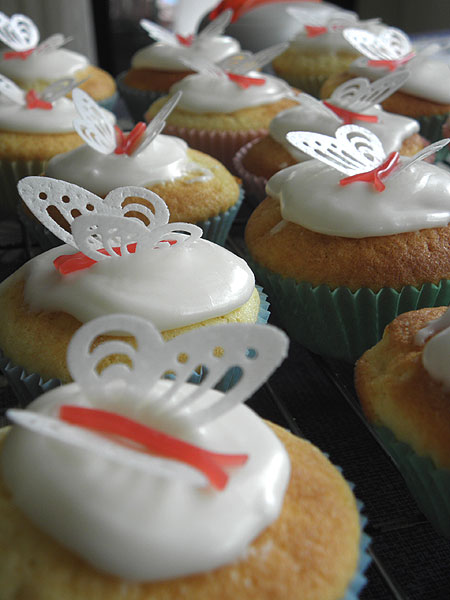 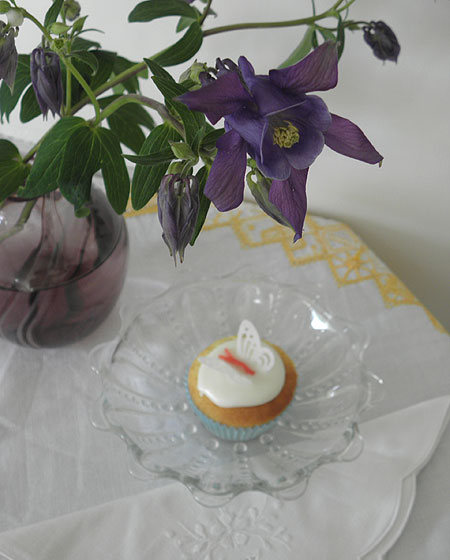 Hello there ! I know my posting has been a bit non existent lately. We've had more than a few computer issues, but I think we're getting there now. I thought it was about time I shared another makeover with you. 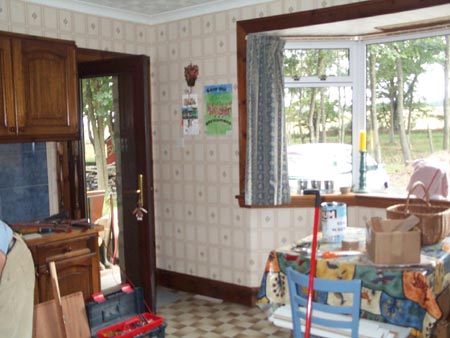 This was the messy kitchen not long after we had moved into our house a few years ago. Please note the large blue bathroom style tiles on the wall, the brown tile effect wallpaper and the brown woodwork. It wasn't really my dream kitchen ! 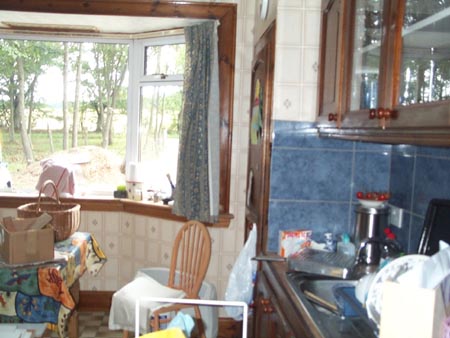 The floor is tiled and I strongly dislike it, but I am afraid I don't have the money or the energy to do anything about that, so that is staying!
But, it's amazing what you can do with a bit of paint. 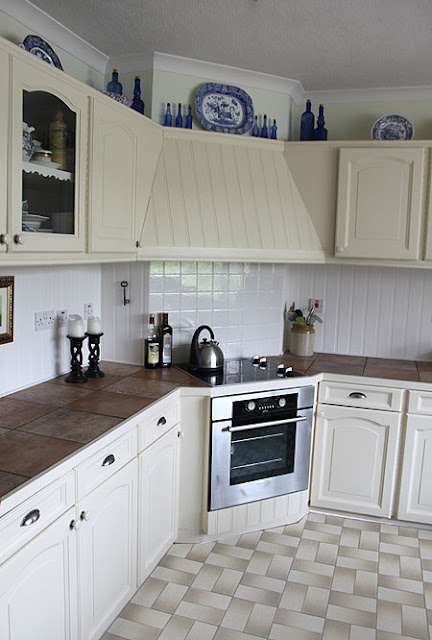 This is the same kitchen. It took a LOT of work. The large rayburn cooker was replaced and due to that we had to redo the tiles on the top of the counters. ( I know you probably think I'm mad to have ripped out a rayburn, but it ran on oil and we couldn't even afford to turn it up hot enough to cook anything as it seemed like it just ate fuel. So in the interests of being able to afford to eat, it went.)  We couldn't find the right tiles to replace the missing ones, so I ripped off all the tile on top of the units and scrubbed and scraped all the adhesive off, then bought a similar one and laid them in a chequer board pattern with the original ones. It's subtle, but it works. The cooker hood was originally a beaten copper effect thing which we ripped out and I recovered it  with beadboard. 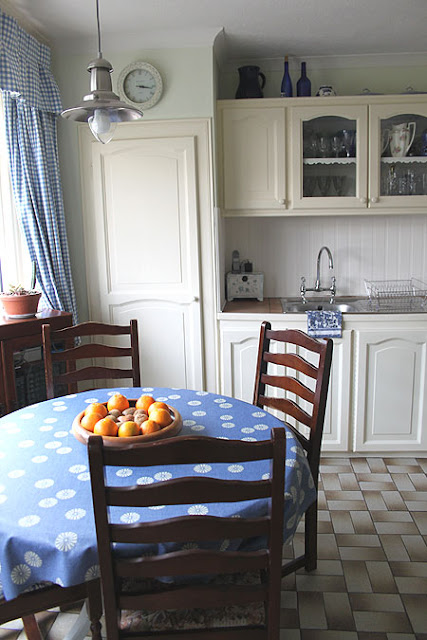 The units and all the ugly brown woodwork were painted in Farrow and Ball paint - (House White was the shade). The shelves behind the glass doors which were damaged and ugly were edged with a decorative strip from Jali. New handles for the units made a huge difference. I love cup handles!  The nasty big blue tiles were ripped off and replaced with beadboard which I painted in an off white. I tiled behind the hob with white tiles. I redid the ceiling which was artex swirls and had a large rectangle cut-out where a striplight was housed behind some ugly plastic. The kitchen taps were replaced with a much more stylish and user friendly mixer. The walls were painted in a soft green- I forget what the shade was though. 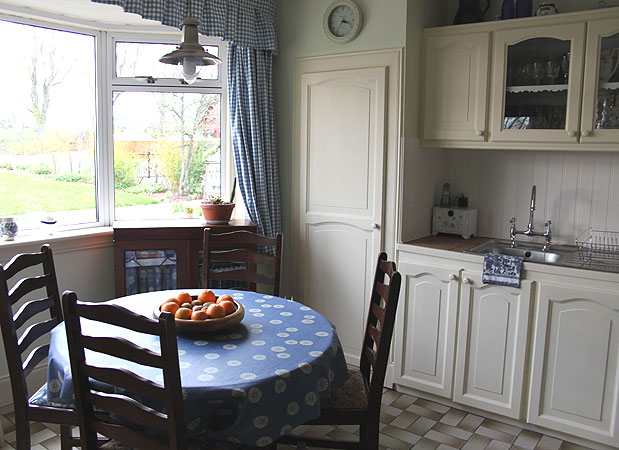 ...and the floor...well, I still hate it, but we are going to sell the house soon - hopefully - so I shall be laying down a large rug to minimise the effect of the tiled area.
Would I paint kitchen units again? - Absolutely! It can turn drab into fab!
(Now if I can just keep the counter-tops that tidy, I'll be winning!)
Linking to Met Monday at www.betweennapsontheporch.blogspot.com
Posted by Doda at 15:10 12 comments: 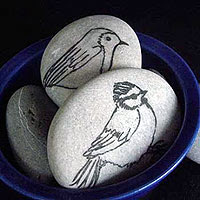 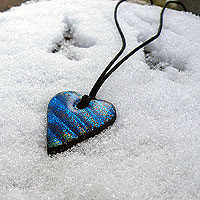 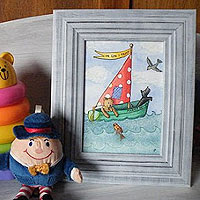 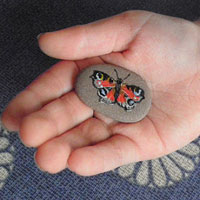 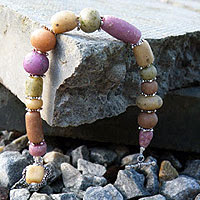 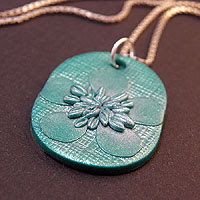